CD Review: Easy Star All-Stars' 'Dub Side Of The Moon' 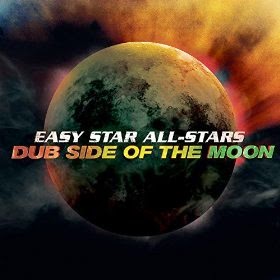 In celebration of their 10th anniversary for the 2003 release of the same name, Easy Star All-Stars are proud to announce their dubby and reggae-infused, Dub Side Of The Moon. The album celebrates the music of Pink Floyd with his ever-popular, Dark Side Of The Moon released many years ago. This new release contains different liner artwork, a liner note booklet, and a few bonus tracks. The entire project is produced by Michael Goldwasser and Victor Axelrod. The album is fifteen-tracks long and features the music of Pink Floyd's abovementioned release, including "Speak To Me," "Breathe," "On The Run," "Time," "Brain Damage," and several others. The dub and reggae-infused concoctions are heady, lush, and dance-inducing. There are electronic elements, which modernize the sounds a bit. But, anyone interested in reggae, dub, and Pink Floyd will love this very special ten year anniversary release. ~ Matthew Forss
Posted by Matthew Forss at 10:50 AM