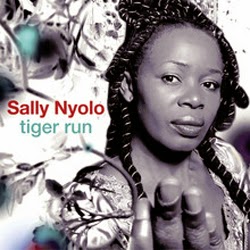 Cameroon's Sally Nyolo has released a few albums over the years and they continue to provide an introspective and awe-inspiring window into her personality and creative style. The Afro-pop foundation of her songs are still inherent on Tiger Run, but there seems to be more attention given to other influences. For example, there are South Asian undertones on "Me So Wa Yen." "Bidjegui" is inherently-African, but it tends to be rather repetitive. "Tiger Run" is more like a ballad from a lounge club or jazz club somewhere in North America. The bubbly guitars of "Eeeh," signify a true, West African song rich in vibrant percussion and a fast tempo. The entire album is only thirty-eight-minutes long, which may be disappointing. Nevertheless, Sally Nyolo returns to the studio with a rather admirable result with only minor adjustments needed. ~ Matthew Forss
Posted by Matthew Forss at 2:37 PM