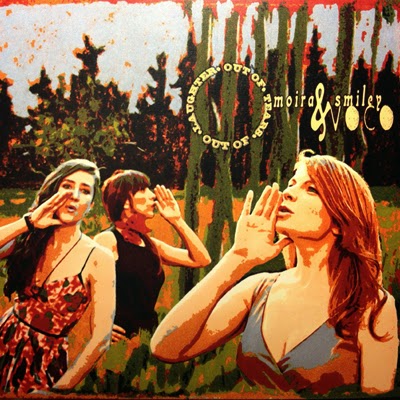 The sensational vocal songs of Moira Smiley & VOCO are steeped in Appalachian, Scandinavian, and European styles that echo similarities with Dala Girls, Varttina, Heidi Talbot, Helene Blum, Fay Hield, Karine Polwart, and similar gals. The album features fifteen songs of audio delight that are mostly original songs, but some are covered from Swedish, Appalachian, Serbian, and Croatian ancestries. A few feature vocals as the lead instrument. The group has an uncanny ability to magically gel together with such a compelling and intriguing vocal repertoire that is never pretentious or egotistical. You will even hear a little Zero 7 and Dala Girls influences on "Blow Blow Thou Winter Wind." The forty-five-minute album is hearty enough; even for the most discriminating vocal connoisseur. Anyone with an interest in female vocal folk music will relish Laughter Out Of Tears. ~ Matthew Forss

Posted by Matthew Forss at 2:41 PM