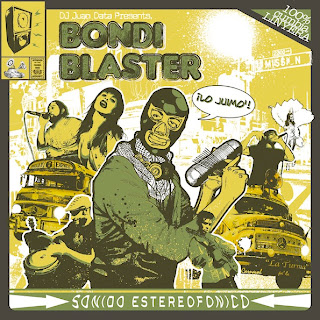 The music of Argentina is showcased on an inventive and decidedly modern release by San Francisco-based, Bondi Blaster. Bondi Blaster is DJ Juan Data, who experiments with down-beat samples, electronic cumbia, and acrobatic vocals that hint at folk, spoken word, and rap. The album's title is inspired by a classic Colombian cumbia album, Nos Fuimos!, by Corraleros del Majagual. The result is a party-like atmosphere that is void of sleepy, folk tunes. Instead, Bondi Blaster knows how to entice a danceable spirit and youthful exuberance in the listener with foot-stomping and hip-shaking rhythms and melodies. A handful of original compositions, remixes, and instrumentals provide a heterogeneous mix of dance, down-tempo, trance, urban, and nu-cumbia influences with a few pan-pipes that are sure to create a lively and joyful raucous. Anyone interested in South American cumbia, hip-hop, rap, dance, electronica, and funky, good music will find satisfaction in Bondi Blaster's latest hit, Lo' Juimo! ~ Matthew Forss
Posted by Matthew Forss at 8:04 AM