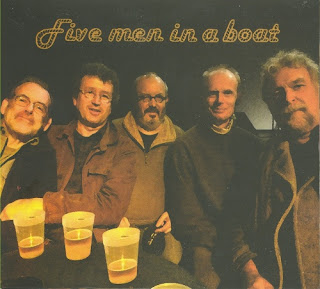 Five Men In A Boat are a Norwegian group composed of performers from Norway, France, and England. There may be five men in the group; three nationalities represented; and one unifying quality that makes it all work. The traditional folk music of Ireland, Scotland, and England may be seen here. The pensive strings, giddy concertina, and guitars make the sound come together. The vocals are what one would expect for male folk music from this region. The voices are folk-driven and varied, according to the rhythm. Some of the songs possess a seamen's ambiance. Every song contains, rugged charm, soulful yearning for nostalgia, and good old fashioned stories in musical form. Extensive liner notes in Norwegian and English are included. ~ Matthew Forss
Posted by Matthew Forss at 1:01 PM