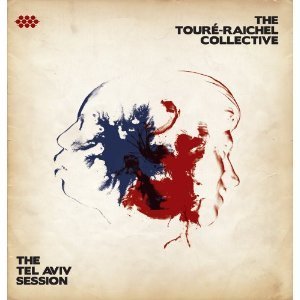 The combined musical talents of Idan Raichel (Israel), Vieux Farka Toure (Mali), Souleymane Kane (Mali), and Yossi Fine (Israel) represent a very experienced and cohesive group of musicians that shine effortlessly on The Tel Aviv Session. The African, Middle Eastern, and European-influenced compositions are produced with instrumentation as a paramount element. Though, a few vocals are present, but only on a few tracks. The melodies and rhythms are accomplished with calabash, guitar, piano, bass, tar, harmonica, and kamanche. The cultural diversity is rather unique, but most of the music centers on African and Middle Eastern music. The lilting melodies of the kamanche, calabash, and guitar, make the album shimmer with rich textures and moods. This is ideal for fans of Idan Raichel, Vieux Farka Toure, Yossi Fine, and Souleymane Kane. In addition, fans of African and Middle Eastern music and authentic instrumentation without electronic or dance elements will love it. ~ Matthew Forss

This is an amazing album. In his other albums, Vieux sometime tends to go a little "wild" with the guitar, but in this one he shows considerable restraint while showing his guitar playing prowess. The fluidity and talent in this album reminds me of the high caliber yet restrained music that Ali Farka Toure and Touamni Diabate were known for. I can't wait to hear this album live!