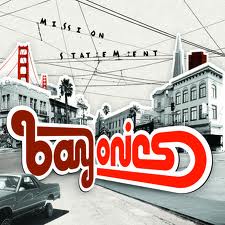 The classic, funk-driven melodies of a ten-piece band, Bayonics, is based in San Francisco. Mission Statement is a culmination of various genres, including funk, fusion, hip-hop, reggae, jazz, down-tempo, and Latin-infused music. The contemporary rhythms and vocals contain a plethora of influences that all boil down to good clean funky music with no side effects--except for the constant desire to move one's feet and body upon hearing the music of Mission Statement. The eleven tracks reflect a different musical progression rarely observed in the Bay area, because many new groups tend to stick to urban, dance grooves with some world music elements. Instead, Bayonics pave the way for Latin-infused concoctions of danceable grooves and beats with no signs of slowing down. Mission Statement is the new soundtrack to the Bay area's city limits. ~ Matthew Forss
Posted by Matthew Forss at 2:32 PM