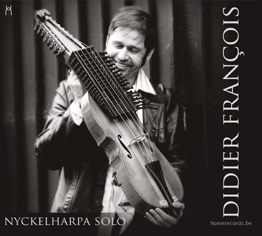 The Belgian, Didier Francois, is a noted nyckelharpa player and teacher. The nyckelharpa is a keyed harp or fiddle with keys attached to tangents that serve as frets to change the pitch of the strings. Traditionally, the nyckelharpa is a native of Sweden, but it is found in many other Scandinavian and European countries...and other parts of the world. As its name suggests, the nyckelharpa is the only instrument on this recording. Additionally, there are not any vocals. Instead, Didier plays various compositions with nyckelharpa. There are sixteen instrumental tracks, which include some original tunes, and others composed by Jamil Masud, Johann Sebastian Bach, Erik Sath, Antonio Carlos Jobim, Susanne Paul, Charlie Mariano, Jose Toral, Eugene Ysaye, and Carl Michael Von Esser. The instrumental tracks are perfect for classical, folk, or violin fans. This is a top release for nyckelharpa fans, too. ~ Matthew Forss
Posted by Matthew Forss at 7:24 AM