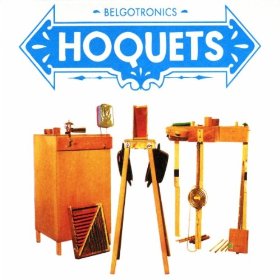 Hoquets is named after both the technique in Western medieval music of sharing a melody line between several voices or instruments and the French word for "hiccups." The band (pronounced: Okay) is born in Belgium with some American influences, too. For instance, home-made instruments and hip-hop/punk elements are evident on a few tracks, notably "Beni B," "Couque de Dinant," and "Otanato." The modern instrumentation incorporates a plethora of tinny, metallic, thumping, and squeaky sounds to go around. The music is somewhat catchy, but the instrumentation is quirky, compelling, and organic. As its name implies, there is a strong Belgium element throughout, but Flemish and French styles and languages are also represented. Overall, the sound is reminiscent of a drier funk, rock, and folk/hip-hop music that is what would happen if the Beastie Boys joined forces with Beck, Squonk Opera, and Blue Man Group. Whatever you call it, Belgotronics is an album that celebrates Belgium living and it is unique beyond belief. ~ Matthew Forss
Posted by Matthew Forss at 3:58 PM