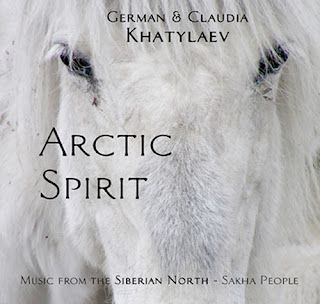 Hailing from Yakutia, Siberia, German and Claudia Khatylaev perform traditional folk music with authentic, native instruments celebrating epic stories, animals, shamanic themes, and issues of daily living. Specifically, the music highlights the Sakha (Yakutia) culture in northern Siberia. The native instruments tend to sound like their natural environment--reindeer galloping, bird noises, wind blowing, and animal mating sounds. The Jew's harp (khomus) is the national instrument and it is featured on several tracks. The kyryympa, a horse-hair instrument similar to Mongolia's morin khuur, is another celebrated instrument and important fixture in Sakha society. A variety of drums and other percussive instruments, including the dungur, dzhargha, and aiaan elucidate the primordial sounds of nature. Over one hour of music captures the sincere music of the region with a 36-page booklet detailing the songs and instruments used. Some of the songs are more melodic than others. Many evoke sounds and images of nature's splendor without resorting to boring or dull compositions. Claudia's throat-singing is very enticing and variable, depending on the desired effect. Anyone interested in Russian folk music, shamanic music, Central Asian music, Mongolian folk, or anything released on the Sketis label will love the soothing, intriguing, and rarely-heard sounds from Yakutia on Arctic Spirit... It is chilling in a good way. The album can be purchased at www.amazon.fr, www.priceminister.com, or directly by emailing me at: worldmusicman2002@yahoo.com. ~ Matthew Forss
Posted by Matthew Forss at 8:47 AM