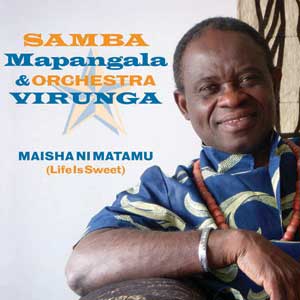 Born in the Democratic Republic of Congo, Samba Mapangala has since worked in Uganda, Kenya, and the USA. Samba's Orchestra know how to entertain smooth, hip-swaying guitar lines that echo the golden era of soukous music. The Latin-influenced and Caribbean-tinged compositions reflect Central Africa's historical link to the Caribbean and Latin American regions. The jazzy, "Zanzibar," features guest vocals from Tanzanian vocalist, Bi Kidude. Not only is the album sweet, the title even connotes that "life is sweet." The swaying rhythms of the vocal track, "Jirani," provides a luscious array of rumba/reggae melodies. The upbeat and jazzy "Nipigie Simu" is a writhing hit that inspires one to dance the night away and never look back. Despite the forty-minute length, the music is varied, danceable, and rhythmic. Not to mention, the music carries on the rumba, soukous, and Afro-Latin musical connections that have put central Africa on the map. ~ Matthew Forss
Posted by Matthew Forss at 9:12 AM