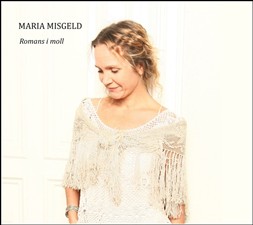 Romans i moll (Romance in B minor) is the latest release by Sweden's Maria Misgeld. The angelic voice is beautiful and entrancing no matter what key it is in. This album contains limited instrumentation, but that does not detract from the musical qualities of the compositions. Maria's vocals are accompanied by Olle Lindvall on nylon acoustic guitar; Olof Misgeld on fiddle and viola; and Arne Forsen on harmonium. The traditional songs reflect a truly, Scandinavian presence without the addition of drums, rock tunes, or dance music. The mostly Swedish tunes are also on the same album with Finnish and Norwegian tunes. Inspired by historical places throughout Sweden, Maria sings sweet melodies and tunes with the exuberance of fellow countrywomen, Emma Hardelin and Jenny Wilhelms. Steeped in folk traditions, Romans i moll sets the new standard for Swedish folk music today. You will love it! ~ Matthew Forss
Posted by Matthew Forss at 2:17 PM