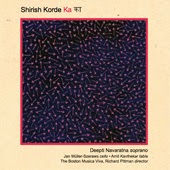 As an Indian composer and musician born in Uganda, Shirish Korde possesses and innate ability to combine the classical works of the world with South Asian melodies and rhythms. Shirish aids the help of Deepti Navaratna, a soprano singer and tamboura player, along with cellist Jan Mueller-Szeraws and tabla extraordinaire, Amit Kavthekar. The five compositions are rather spacious and steeped in swirling, South Asian melodies and neo-Classical arrangements. However, Deepti is featured on each song. The concept of Ka pertains to a unifying, musical cycle that brings together dualities--namely, Eastern and Western musics. Shirish succeeds with an astounding release of musical arrangements that are both thought-provoking and haunting. At any rate, the musical addition of chamber-like orchestrations and Deepti's mesmerizing voice, creates an unforgettable album that will span the recording devices of Western and Eastern listeners everywhere. ~ Matthew Forss
Posted by Matthew Forss at 12:40 PM