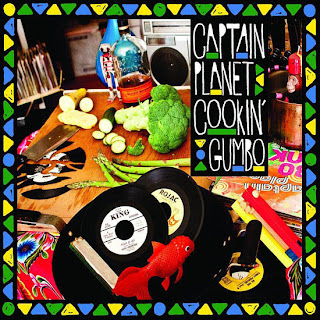 You might think Captain Planet is named for the iconic comic hero. Instead, Captain Planet is a perfect title to describe the musical influences inherent throughout the tasty tracks on Cookin' Gumbo. As a first full-length album effort, Captain Planet (aka Charlie Bethel) creates supercharged music with funky beats, Latin elements, and African sensibilities within the context of an urban environment. Even South Asian influences can be found on 'Ram Ad Infinitum.' An LA-area singer, Brit Lauren, adds her voice, along with Congo's Fredy Massamba. The bossa-nova beats, contemporary urban electronica, and African hip-hop set the stage for a delicious romp on the wild side of the musical spectrum. Some of the tracks have good 'ol, nostalgic scratches at the beginning of the songs. Still, Cookin' Gumbo is an appetizing album with all the spice that life can drum up! ~ Matthew Forss

Posted by Matthew Forss at 2:44 PM

One of my favorite albums of the year! Fire!