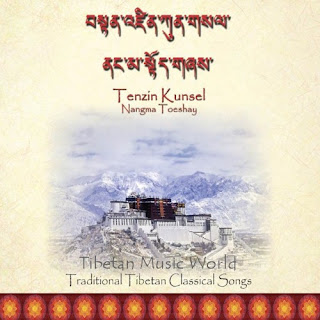 New York City-based Tenzin Kunsel is a female, Tibetan singer at only sixteen-years of age. Tenzin's voice is as mature as fellow countrywoman, Yungchen Lhamo. On this album, Tenzin explores classical songs in Nangma and Toeshay forms. Both forms are similar, because they both incorporate female vocals, the dramnyen lute, and musical structure consisting of a short introduction (Jog), a slow section (Dhel Shae), and a fast section (Shab dro). The only differences surround the musical structure: Toeshay, rooted in folk dance, is slightly more repetitive, while Nangma is more intricate with greater variation in melodic structure. Whatever the form, Tenzin nails it. The soaring vocals and galloping lute sounds are perfect accompaniment for a Himalayan trek or nomadic journey through Mongolia's steppes. As with other Tibetan music, peace and tranquility are endearing attributes that are not absent here. Help benefit Tibetan refugees and the music at the same time, as ten-percent of the proceeds from CD sales go directly to the refugees through the Tibet Fund. ~ Matthew Forss