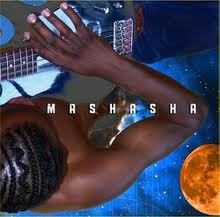 U.K.-based and Zimbabwe-native, Mashasha, is heating up the charts with his jazzy, folksy, and Afro-pop-centered, self-titled release. The stirring rhythms, Shona vocals, and guitar mastery are evidenced throughout the album's ten tracks. The liner notes contain English and Shona lyrics, which make it easy to follow along with the songs. The most striking comparisons to other musicians, notably Zimbabwean musicians, only include the famed guitarist and singer, Oliver Mtukudzi. The sincerity of "Baba" and the giddiness of "Huwi" makes Mashasha explode with creativity, class, and charisma. The jazzy, almost Latin elements of "Gutegu" resemble a bit of Fela Kuti with spoken word rhetoric amidst a catchy, rhythmic beat and choral voices from backup singers. The simplicity of "Mambakwedza" displays Mashasha's more intimate side with a very calming and quiet manner where Mashasha's soft voice and guitar-playing make striking comparisons to the warmth from the early morning sunshine on a Summer's day. Now Zimbabwe can be proud of another beaming light of wonder: Mashasha! ~ Matthew Forss
Posted by Matthew Forss at 8:49 AM