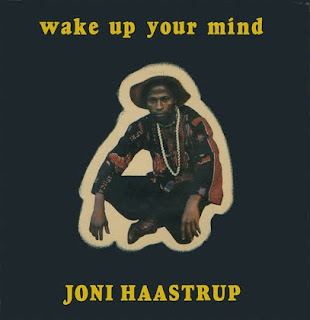 Wake Up Your Mind

Nigerian-born and US-based funk king, Joni Haastrup, released a wicked LP on the Afrodesia imprint back in London in 1978. The LP titled Wake Up Your Mind contained the same six tracks on the current reissue from Tummy Touch. Joni's funk-driven form of music contains the classic bass-lines, instrumental grooves, and lively vocals characteristic of other performers of the time. 'Greetings' is a jazzy, funk-riddled song with equal amounts of down-tempo and African elements. The title track, 'Wake Up Your Mind,' is more of a social concern song with all the funk one can stand. 'Champions & Superstars' is a jazzy, bass-heavy, and funky song with more of an American musical feel. 'Do The Funkro' is littered with funkisms, glorious harmonies, and Fela Kuti-like similarities. In fact, Fela Kuti might be the most influential musician here. The last track, 'Watch Out,' is a bit of classic funk with rock thrown in to keep the mood high. Fans of Tirogo, Psychedelic Aliens, and other African 70's funk music will find Joni's latest reissue very satisfying. English vocals are present on all of the tracks. ~ Matthew Forss