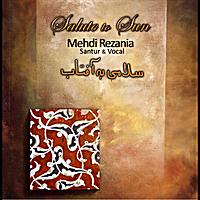 Born in Iran and based in Canada, Mehdi Rezania is a talented santur (hammered dulcimer) master highly influenced by another santur master, Ardavan Kamkar. The music is rich with sparkling tones and traditional melodies. Each song contains detailed notes on its inspiration in the liner notes in English. One such track, "A Child In A Garden," is about Mehdi sleeping in too late on Saturdays. The four, brighter musical notes mimic the phrase: "Time to get up....Time to get up..." repeatedly, even though there are no vocals. Vocals are present on "Drinking to Toos," by Hassan Kasayi. Mehdi accompanies Hassan on santur. The track is an ideal example of Persian classical music. Other vocals are on "Salute to Sun." Notably, ten tracks are listed in the liner notes, but only nine are included. Still, nine tracks contain plenty of music for the Persian classical and santur fan. ~ Matthew Forss
Posted by Matthew Forss at 9:33 AM