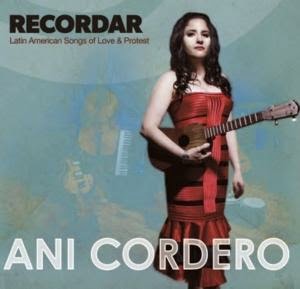 Puerto Rican-born and Brooklyn-based, Ani Cordero sings songs from an era of love and protest with Recordar: Latin American Songs of Love & Protest. The songs are mostly tunes originally conceived in the 1960's, but one song dates from 1930, one from 1942, and still a few others originate from the 1970's. The countries of origin for the songs come from Chile, Argentina, Colombia, Cuba, Brazil, Puerto Rico, Mexico, and Venezuela. Ani lends her vocals, guitar skills, and percussion repertoire to the album, alongside other instruments, such as bass, guitar, accordion, trumpet, flugelhorn, ngoni, trumpet, keyboards, cello, piano, and assorted percussion. The songs are uppity, classic, and catchy. Anyone with an interest in nostalgic songs from Latin America will love Ani's new album. ~ Matthew Forss
Posted by Matthew Forss at 1:22 PM