CD Review: Atash's 'Everything Is Music' 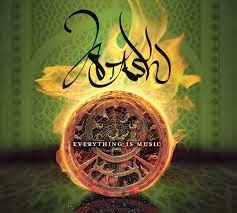 Atash
Everything Is Music
Ars Mundi

Everything Is Music is titled from a poem by Rumi, a Sufi poet of the 13th century, which combines swirling, Middle Eastern rhythms with hypnotic flamenco, Indian, and Mediterranean influences. The mature vocals are not too boisterous and very akin to Cheb Khaled. The band is spearheaded by Mohammad Firoozi Dashtestani, who hails from Iran. The Farsi singer aids the help of fellow musicians, Roberto Riggio on violin; Dylan Jones on bass; Abou Sylla on balafon, djembe, and conga; Jose Manuel Tejeda on acoustic guitar; Jason McKenzie on drums and tabla; John Moon on violin; and Indrajit Banerjee on sitar. The nine tracks are a global goldmine of infectious sounds and world rhythms. The Austin, Texas-based band finds no trouble getting their music across to the local crowds, as well as an international audience. The music cuts through borders and beliefs by creating organic, yet accessible, music tunes. Rumi would be proud! ~ Matthew Forss
Posted by Matthew Forss at 6:43 PM