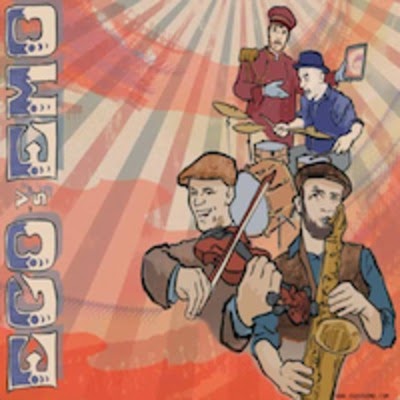 German electro-klezmer music? Yes, indeed. That is the only way to describe Ego Vs. Emo's latest musical offering. The album contains seven long tracks of instrumental glory littered with danceable elements, brassy and bossy klezmer sounds, and swirling melodies and rhythms that are punchy and original. The songs are full of vibrant sax, violin, drums, accordion, guitar, and electronic programming. The songs are titled in German, but consist of various numbers. There are a couple spoken, German vocals on "Hundertdrei," but the majority of music is instrumental. Balkan jazz, klezmer, big band, and psychedelic constructions define the primary theme of Ego Vs. Emo's self-titled album. If the band's name won't draw you in, then the music will. ~ Matthew Forss
Posted by Matthew Forss at 12:31 PM