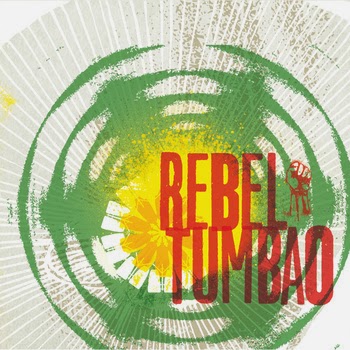 New York-based and world-traveled, Rebel Tumbao's leading musicians, Matt Jenson and Jose Clausell, bring together a roots-reggae and Afro-Cuban-inspired concoction of moving rhythms and melodies with fiery percussion and punchy horns. The self-titled work contains ten tracks and one bonus hit. Several of the songs are attributed to Bob Marley and one by John Coltrane, but the similarities pretty much end at their names. However, co-founder and keyboardist Matt Jenson is penned to the remainder tracks. "Natural Mystic" begins with a roots-reggae groove and it ends with a Afro-Cuban medley. "A Love Supreme/Exodus" contains much of the same vibrant, Afro-Cuban percussion, but it tends to move into an Cuban jazz vein. The music is soulful and not too unlike the funk and jazz of the 1970s. "Masters Of Greed" begins with a light melody, B3 sounds, and a laidback, sultry vocal track that gets into your soul and never lets go. "Spare A Nickel" heats it up a bit with punchy horns and sweeping, Afro-Cuban melodies and great vocals. Fans of Afro-Cuban, Jamaican, Caribbean, and roots, soul, funk music will love Rebel Tumbao. Be a rebel today! ~ Matthew Forss

Posted by Matthew Forss at 6:07 PM