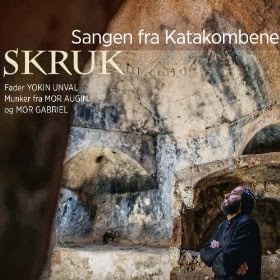 SKRUK is a Norwegian choir that presents a collection of liturgical songs sung in Norwegian. There are also vocals from monks in Turkish monasteries. Per Oddvar Hildre is the conductor for the album, while Siyavush Karimi and Henning Sommerro are talented arrangers. The entire album is vocal without any instrumentation; except for a lone duduk played a couple times. There are twenty spiritual tracks that are heavenly and haunting in the same manner. The spiritual roots of the music originate from the early, primitive church and historical roots with the Syrian Orthodox Church. The alternating male and female vocals are great without any slip-ups. Many of the songs are one to four minutes long, but a couple are five to six minutes. In the end, it doesn't matter how long the songs last. The songs have lasted hundreds of years and will continue to inspire people around the world. Fans of choral and vocal music will rejoice with high marks. ~ Matthew Forss
Posted by Matthew Forss at 6:42 AM