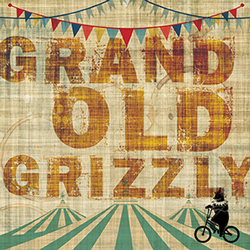 A Texas alt-country act, Grand Old Grizzly presents us with an upbeat, bluegrass, and folk-tinged tunes with clever lyrics and memorable melodies on drums, guitars, keyboards, pedal steel, and bass. Grand Old Grizzly is led by vocalist and guitarist, Will Thomas. But he is joined by Mark Riddell on bass, vocals, keyboards, and percussion; Dustin Welch on banjo; Paul Beebe on drums, vocals, and guitars; and Craig Feazel and Katie Stuckey on pedal steel. The Americana folk sounds are rousing to say the least. There is even a bit of grungy/country-rock on "Tallahassee." The vocals on most of the songs resemble a younger version of Counting Crows-frontman, Adam Duritz. There are pop-centric elements which are bright and energetic, but the vocals are never loud or indiscriminate. The simplistic "I Was Thinkin'" is a dreamy ode on guitar with light instrumental embellishments. "Pretty Little Head" contains a slew of poetic vocals and giddy guitar stylings with pure pop pleasure wrapped around a country-esque backbone. There are eleven songs in all and none of them suffer from any insufficiencies. Grand Old Grizzly is grand music with a heart and soul. ~ Matthew Forss
Posted by Matthew Forss at 5:10 AM