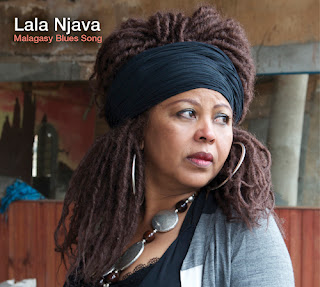 Anyone familiar with Malagasy music knows about the valiha (tube zither) and probably Tarika - one of the most popular bands from Madagascar. However, you need to know about another group spearheaded by blues songstress, Lala Njava. Lala creates moving, contemporary, and bluesy tunes with lush Afropop rhythms and melodies that are very accessible. Lala is the chief vocalist, but is joined by Dozzy Njava on guitars, Pata Njava on drums/percussion, and Maximin Njava on bass. There are also backing vocals in the mix, along with a banjo and accordion making an appearance on a few tracks. Lala's vocals are rather choppy and mature beyond her years, but that breaks up the backing vocals and crystalline instrumentation. Vocally, Lala is the African equivalent of Stevie Nicks. ~ Matthew Forss
Posted by Matthew Forss at 1:43 PM