CD Review: Stone Diamond's 'We Stole The Stars From The Black Night' 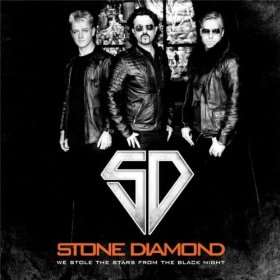 With ties to New York and Germany, Stone Diamond rocks out with some heady blues-inspired tunes with an alternative--almost grungy--edge. The solid vocals are not too loud or intrusive. There are rock harmonies and swirling guitar melodies that do not disappoint. The entire album was produced, composed, and engineered by lead vocalist and bassist, Cy. Cy is joined by Josh on vocals and guitar, along with The Tongue on drums. The trio perform hard-hitting, yet melodic anthems of blues-rock greatness. "Tattoo" leaves its mark with Soundgarden-esque vocals and guitar arrangements. "U Know" is a more languid tune with grungy guitar arrangements that meander with a mysterious beat that is more thriller or spy film soundtrack related than modern rock band performance. At any rate, this showcases the diverse song stylings and sounds Stone Diamond has no problem creating. "When We Were Young" contains a little alt-country rock and blues elements with a classy, almost vintage feel. The guitar and percussion beats resemble early U2. "Long Hard 5 Days" reaches into some grungy, rock-infused music with electronic voicings and punchy bass. Overall, there are eleven tracks that feature a range of grungy, alt-rock, and blues-infused concoctions that are not for the faint of heart (aka Top 40 listener). However, the songs may make the Top 40 list in the future, but Stone Diamond contains a hard edge that is surprisingly easy to listen to. ~ Matthew Forss

Posted by Matthew Forss at 5:53 PM