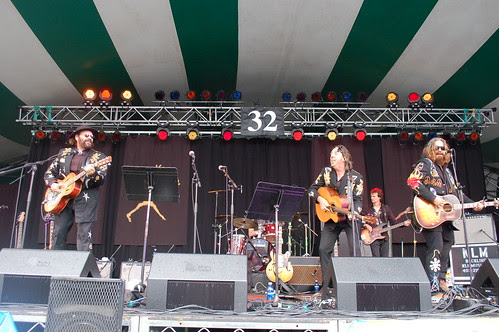 Blackie and the Rodeo Kings - EFMF 2011, a photo by raise my voice on Flickr.

I still listen to the album Strays, the debut from a then-unknown eastern Canadian rock band called Junkhouse. The lead singer was Tom Wilson, a large, shaggy man with a voice that can go so deep, it almost sounds like a low-tuned bass guitar.

Life post-Junkhouse has been busy for Wilson. Amongst other musical projects, he has been one-third of Blackie and the Rodeo Kings, considered a supergroup of Canadian singer/songwriters and guitarists. Besides Wilson, the trio includes Colin Linden and Stephen Fearing.

Blackie and the Rodeo Kings were the Sunday afternoon main stage act at the Edmonton Folk Music Festival. Their very energetic blend of rock, roots, and blues was exciting - and loud. The group played a number of original songs, as well as covers from blues and rock legends. Their excellent musicianship both instrumentally and vocally, as well as their command of the stage, made Blackie and the Rodeo Kings one of the highlights of the weekend. ~Paula E. Kirman