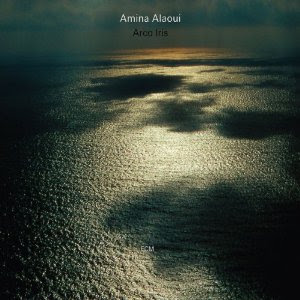 Andalusian singer, Amina Alaoui, was born in Morocco and currently based in France. Amina's Gharnati music traditions meld with a bit of fado, Ladino, and flamenco thrown in encapsulate the general tone of the album. Amina's all-star cast of musicians reflect another aspect of global music, as her band represents Brazil and Tunisia, too. The relatively sparse instrumentation adds to the meditative, mournful, and calming effect. Amina plays the daf, while her son, works on percussion. Eduardo Mirand on mandolin, Saifallah Ben Abderrazak on violin, Sofiane Negra on oud, and Jose Luis Monton on flamenco guitar round out the band's repertoire. Fans of Portuguese, Spanish, Ladino, fado, Andalusian, and North African music with a special interest in the folk and classical music traditions will find Arco Iris extremely pleasing. Amina's vocals are not as pop-oriented as Algeria's Djur, or as operatic as the fadista Mariza. ~ Matthew Forss

Posted by Matthew Forss at 2:27 PM