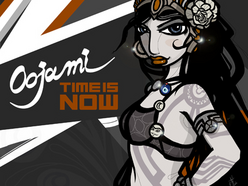 Oojami is the group headed by Necmi Cavli, a Turkish DJ based in the U.K. Time Is Now is primarily a pulsating, dance-club set of tracks inspired by Turkish and Middle Eastern rhythms and instrumentation. However, the drums and bass steal the show for the most part. A few guest vocalists, such as Marilyn Gentle, Elysha West, Aktar Ahmed, Arujunan Manuelpillai, and Blair Mackichan add their talents to some of the tracks. Overall, a relatively urban, contemporary sound rules the album. Though, a few instruments suggest Turkish melodies from a more classical vein. Still, Oojami's strengths relate to the dance-club tracks, which have been featured in a few films, too. The groovy, dance tracks are perfect for drifting away to a musical place of awe and adventure. The vocals are in English, though lyrics are not provided in the liner notes. ~ Matthew Forss
Posted by Matthew Forss at 12:20 PM