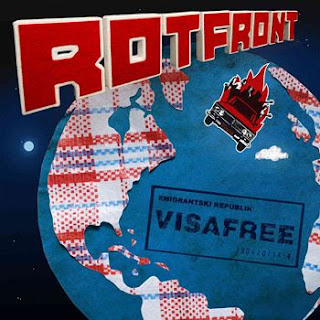 Berlin-based, Gypsy/Klezmer-band RotFront, brings us a punk-driven, humorous, and carefree set of songs in various languages. The primary pulse behind RotFront's beats are inherently brassy and brashy with a good dose of colorful language, upbeat rhythms, and melodies influenced by Cape Verde, Central America, and the Balkans. The hilarious "Gay, Gypsy & Jew" is a vocal ode to the Gay-Gypsy-Jew populations. The nostalgic disco track, "Revolution Disco," is a danceable track with blaring horns, punchy rhythms, and English lyrics. The riotous, lyric-ladened "Cosmos," is something the American group Smash Mouth might have created; but didn't. The Gypsy-inspired, punk-rock is quite accessible to Balkan and European youth with a few older adults chiming-in for good measure. VisaFree is 'free' from defect in all regards. Buy it today! ~ Matthew Forss