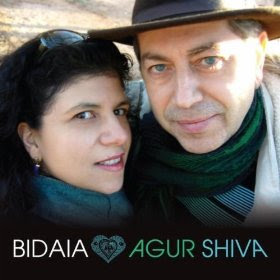 
The Basque regions of Spain and France are relatively underrepresented in today's global music family. Thankfully, Bidaia, which means "voyage", is out to change all that. The group is essentially Caroline Phillips and Mixel Ducau with a few additional musicians. Mixel is from the Basque region, while Caroline is a US-based singer/songwriter of Persian and Greek origin. Both musicians lend vocals on a few tracks, while others are completely instrumental. Caroline plays the ahotsa, zarrabetea, and hurdy gurdy. Mixel plays the ahotsa, guitar, albokak, bamboo clarinet, and hornpipes. The hurdy gurdy is a nice accompaniment that adds a little Scandinavian charisma to the French and Spanish-tinged songs. Almost half of the songs are purely instrumental. The vocal songs are sung in the Basque language. The driving folk rhythms are a bit Scottish, Irish, and Andalusian in tone without any direct comparisons to the aforementioned genres. Nevertheless, Agur Shiva is a lively album with folksy rhythms, traditional instrumentation, and a plethora of Basque charm to go around. ~ Matthew Forss

Posted by Matthew Forss at 4:26 PM