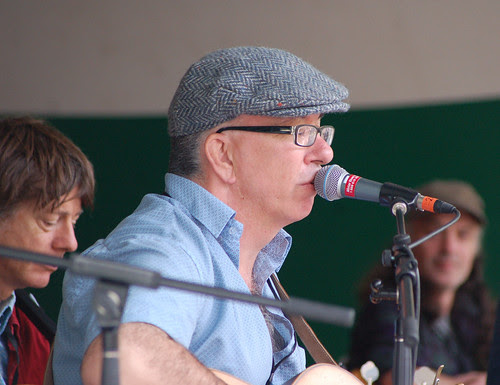 James Keelaghan - EFMF 2011, a photo by raise my voice on Flickr.

James Keelaghan has a voice that draws you in and then will not let go until he has finished the story in his song. Keelaghan is originally form Calgary but now lives in Eastern Canada. Although not a household name, he has been touring and releasing albums for years. His lyrics often deal with different aspects of history, both Canadian and beyond (such as "Cold Missouri Waters" which is about the Mann Gulch fire in 1949).

Keelaghan performed to enthusiastic audiences throughout the Edmonton Folk Music Festival, giving a full concert on the Friday evening and hosting several workshops during the weekend. This was my first time seeing him live, although I have been a fan for years. His voice sounds as absolutely crisp and perfect live as it does in his recordings.

Someone on Twitter commented that Keelaghan should be considered a national treasure. I could not agree more. ~Paula E. Kirman

I absolutely agree! James is a Canadian treasure, with a beautiful voice. It only takes one song to be hooked! :)

Not a household name? He's a household name in my household! Great voice, amazing songs -- as a writer, I'm in awe of his story-songs: "Cold Missouri Waters," "Kiri's Piano," "Honoré . . ." And while we're at it, viva Compadres!