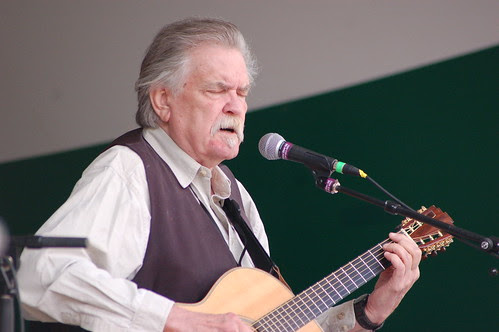 Guy Clark is another performer I discovered by watching American Music Shop (see my previous post about Nanci Griffith). He is also from Texas and a singer/songwriter known for releasing albums of his own work, as well as writing songs covered by other artists. Clark is also a luthier who makes many of his own instruments.

Performing on Saturday afternoon at the Edmonton Folk Music Festival, Clark was accompanied by long-time musical friend Vernon Thompson. His voice was rough from smoking and dust - he explained that he had just performed in a cattle field - but there was also a delicateness to his touch.

World weary, but obviously loving what he does, Clark is a living legend of country/folk songwriters. ~Paula E. Kirman