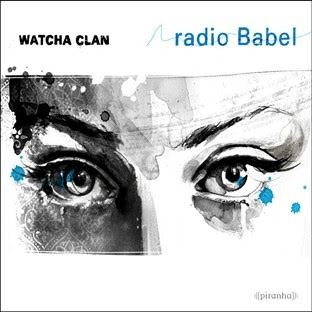 Radio Babel is the new sound for the world's languages. Steeped in a cultural brew, Watcha Clan produces Arabic, Middle Eastern, Balkan, and North African tribe-tronica with more of an emphasis on vocals and diverse instruments than the electronic base. The cultural influences mainly stem from Morocco, Israel, Spain, Algeria, Turkey, France, and the Balkans. Furthermore, the vocals are primarily in English, Arabic, Hebrew, Yiddish, French, and Spanish. Everything from dance, trip-hop, folk, Klezmer, jazz, progressive, rock, and classic ballads with a heavy dose of instrumentation are present. The word 'babel' means 'jumble' in Hebrew. Thankfully, Radio Babel is anything but a jumble of incoherent noise. In fact, Watcha Clan produces a fine album that treads nicely between contemporary and traditional mediums with all of the catchy grooves and tunes one expects from a recording of this high-quality. ~ Matthew Forss
Posted by Matthew Forss at 4:41 PM