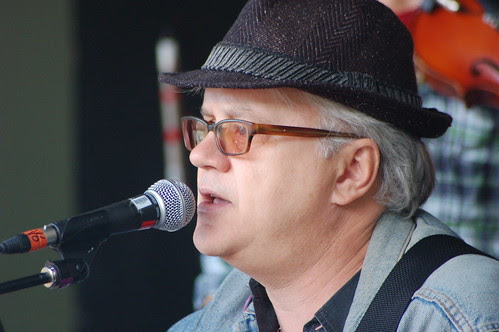 Tim Robbins, a photo by raise my voice on Flickr.

When I heard that Tim Robbins was now a touring musician, I had that same cynical thought I would get every time I heard about a famous actor embarking on a music career. A good actor does not a good musician make. Now, Tim Robbins is not just a good actor - he is an excellent one. As a musician, he is surprisingly solid. He has a musky voice that is also melodic in an untrained sort of way. He certainly got the crowd moving with Pete Seeger's "Well May The World Go," and he kept the momentum up with his solo concert and sessions. I was honestly (and pleasantly) surprised by his musical prowess and I apologize for any cynical thoughts I may have had before. Robbins (and his Rogues Gallery band, featuring his brother on guitar) gained a lot of musical cred during the Edmonton Folk Music Festival. ~Paula E. Kirman