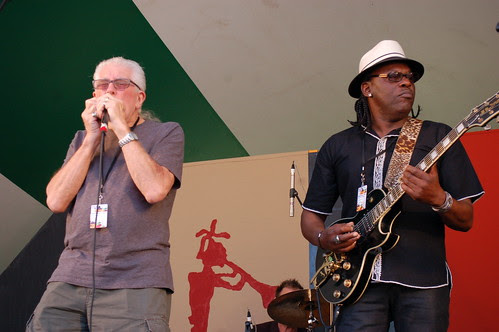 Natch'l Blues is Canada's longest-running blues radio program, on CKUA since 1969. It is also the name of a Saturday afternoon session at the Edmonton Folk Music Festival featuring a powerful combination of artists.

Janiva Magness hosted the stage and performed her sultry, modern blues to an enthusiastic response. She was accompanied by the Preservation Hall Jazz Band from New Orleans, who also did a few numbers on their own.

Duke Robillard to the stage, and the entire group of musicians at that point played off of each other perfectly.

Then, came the biggest thrill yet: John Mayall, legendary British blues musician, performed a couple of songs with Joe Louis Walker. At 77, Mayall can still rock the house.

Natch'l Blues was one of the most exciting sessions of the weekend, with accomplished musicians strutting their stuff - naturally! ~Paula E. Kirman