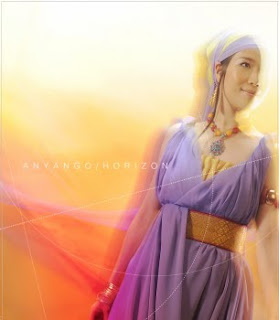 
The seemingly unlikely connection between the music of Kenya and Japan is explored by one of only two female nyatiti performers in world music: Suzanna Owiyo (Kenya) and Anyango (Japan). Though, Suzanna is not featured on this album. The nyatiti is a five or eight-stringed, plucked lyre used in traditional music. The ancient instrument of Biblical proportions is a stand-out on Anyango's second release, Horizon. The album contains mostly traditional Luo songs in the Dholuo language indigenous to Kenya. The opener, "Nkosi sikelel' iAfrika," is a vocal song without any instrumentation. Instead, the song is more like a gospel or partiotic anthem with a joyous choral team. The nyatiti rears its head on the remaining songs with Kenyan melodies and folksy instrumentation. The nyatiti strings keep a good beat that is very danceable and always refreshing. Anyango's intensive study of the nyatiti makes Horizon shine beyond borders. For the best (and probably only) Kenyan-Japanese musical experience, try Anyango today! ~ Matthew Forss

Posted by Matthew Forss at 5:09 PM