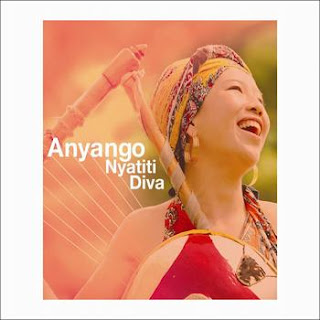 Anyango's first release features numerous songs in the Kenyan language of Dholuo. Interestingly, Anyango is Japanese and one of a small handful of female musicians in the world playing the Kenyan eight-stringed lyre called a nyatiti. Traditionally, the instrument has been reserved entirely for males. Thankfully, Anyango picked up the instrument, because her voice shines with the tinny, harp-like sounds of the nyatiti and the heavenly melodies it creates. The African musical experience of vocal choirs, acoustic accompaniment, and instrumental charm is certainly evident throughout the album, though it is not a drum-beating album. Anyango proves she is the best at the nyatiti by her extensive study of the instrument and devotion to great music. Anyone with an interest in African music will find Nyatiti Diva most compelling. However, the music is largely traditional. If you are seeking a slick, electric production of rock or dance music then you will be sorely disappointed. It's too bad this release was not at least nominated for a Grammy Award. ~ Matthew Forss

Posted by Matthew Forss at 6:08 AM