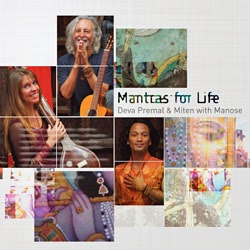 The soothing sounds of Sanskrit mantras are eloquently and meditatively-captured throughout Mantras For Life. Deva Premal is the lead vocalist and tanpura player. However, Miten is also a vocalist and guitarist. Manose adds vocals and Bansuri flute to the mix for a truly thought-provoking and calming production. There are additional instruments, including cello, keyboards, santoor, harmonium, tabla, drums, bass, wurlitzer, fender rhodes, and other vocals. The hypnotic and swirling melodies and rhythms encapsulates the human spirit in an accessible and serene manner that is unsurpassed in most of today's music. There are a dozen tracks, which are mostly mantras. The repetitive nature of the songs ingrains a spiritual presence throughout the deliveries. The liner notes include Sanskrit and English descriptions. Anyone interested in kirtan, yoga, chant music, and hypnotic, trance-inducing compositions will love the music of Deva Premal, Miten, and Manose. ~ Matthew Forss
Posted by Matthew Forss at 6:44 AM