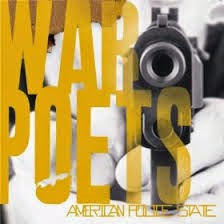 Minnneapolis, MN-based and socially-aware, War Poets take the world by storm with creative, roots-rock-inspired tunes on their latest five-track release. Members include Jenny Case, Rex Haberman, Maureen Koenig McFarlane, Jonny James, Whelan Q Keenan, and Park Evans. Influenced vocally by Tom Petty, Bruce Springsteen, and Jakob Dylan, War Poets bring together a great set of songs that are all different and represent different topics, too. "Closing In" is a perfect roots-rock song with great vocals throughout. "8:05 On A Saturday" is a laidback, folk song with a slight country twang to the instrumental accompaniment. This is a nice example of American roots at its best. "Where Has Love Gone" begins with an upbeat, rock beat somewhat indicative of American music during the early 1990's. "Red Lake" is a similar tune with a grungy guitar set-up, but the track is reminiscent of something R.E.M. would probably produce. Even though the cover art suggests a more sinister recording, American Police State is rather tame from melodic point-of-view. Overall, War Poets receives high marks for lyrical content and melodic flow without any missteps. ~ Matthew Forss

Posted by Matthew Forss at 3:06 PM