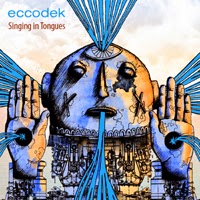 Canadian-based, Eccodek brings us a new recording of global dance, fusion, and world music that mixes contemporary electronica with exotic dub, ethnic folk, and indigenous voices and languages for a truly global journey. The music is a bit more spacious and varied than the music of Tulku. However, there are some trance elements from South Asia and Africa. The groove-laden bass-lines, killer rhythms, and infectious sounds make Eccodek shimmer with a multinational beauty. Eccodek is joined by kirtan singer, Onkar Singh, hip-hop hipster, MC Yogi, Balkan beacon, Meral Mert, and Morgan Doctor - a talented drummer. Of course, there are additional musicians and instruments, which make up the rest of the album. Various guitars, flutes, percussion instruments, horns, and far-reaching sounds blend with several different languages. The whole album is a success; so it is nothing new for Eccodek. ~ Matthew Forss
Posted by Matthew Forss at 3:13 PM